We’ve started a new series to introduce you to our talents by going even more in-depth than their profile listings. So, welcome to Meet Mark Lee, Blue Wave Voiceover Talent! 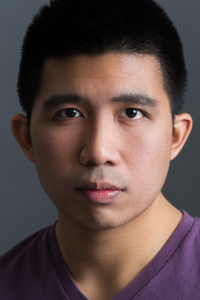 My home-studio is in my basement! I have several sound panels along with other blankets to give myself a quiet space. My equipment includes a Rode NT-1 microphone with a Focusrite Scarlett 2i2 audio interface. I enjoy it since I was able to get a good space together without breaking the bank. However, because I live at home with my parents, I have to tell them that they can’t move around upstairs when I record, which can be a bit hectic since we’re all in quarantine right now!

I play volleyball regularly! Although I’m usually the shortest person on the team, that doesn’t mean I can’t spike the ball!

My friend suggested a theater class to me in college. I had never taken any kind of acting/theater class until that point, but I immediately fell in love with it. After that, I started exploring more of the acting community in college and eventually just kind of stumbled into voiceover through a student film. I’ve loved it since!

I had done several small unpaid voiceover projects in college, which were great for experience. I believe my first real voiceover job was for a training video for a local college. It was a bit nerve-wracking since it was also a phone patch session! It surprisingly went very smoothly luckily. It took maybe about 20 minutes to record everything, and the client was very happy with the product at the end!

Particularly in this day and age, there are so many advertisements that we see everywhere without even realizing it, whether on tv, our phones, or websites. The sheer volume of these political ads means that it is incredibly important for ads to stand out and above the rest of the pool of ads. And I believe that voiceover is essentially to make those particular ads stand out from the plethora of other ads. 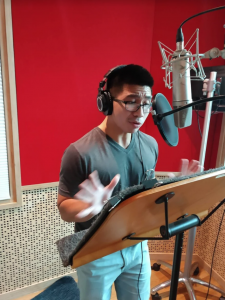 The “wishy-washy” specs! The whole “we’re looking for someone not too young or not too old, not too deep but not too high.” If you don’t know what you’re looking for, that’s fine! But pretending that you know what you want and then listing off a long list of specs that don’t help anyone is a bit amusing yet aggravating at the same time.

As mentioned above, I enjoy playing volleyball! I’ve played it since I was in high school and really enjoy the sport. I also like working out, playing video games, and dancing whenever I get the chance!

If you’d like to book Mark Lee on your next political voiceover project, please visit his profile here and get in touch!