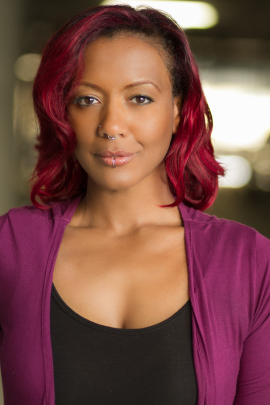 Mara Junot has been considered a respected voice of authority serving political campaigns across the country for over a decade. In addition to her work as a political voiceover talent, Mara's voice can be heard as the voice of AT&T, ION Plus and E! True Hollywood Story, among many others.

Mara is a renowned Los Angeles-based voiceover specialist, supplying the 3-dimensional sound that resonates for Fortune 500 companies around the globe. From feature films to AAA video games, animation to promos, Mara's colorful vocal versatility dubbed her as a voiceover "Shapeshifter" who has been featured by popular household brands worldwide for over a decade, including: Call of Duty, Genshin Impact, The Outer Worlds, DreamWorks, NBCUniversal, League of Legends, ESPN, Fortnite, Persona 5: Strikers, The Walking Dead (Telltale Games), World of WarCraft, Fallout 76 and many, many more.

Pacific Standard Time (PST, GMT-8). Mara is a full-time pro voiceover talent based in Los Angeles. Her average turnaround time is between same-day and 24-48 hours (based on availability).

Mara Junot has been considered a respected voice of authority serving political campaigns across the country for over a decade. From national commercials, feature films and television shows, to sports teams, GPS, animated shows & video games, Mara’s diverse talents as a highly versatile, believable and relatable voice actress have been showcased by some of the most popular Fortune 500 brands and respected names around the world, including Google, Target and Amazon.

Mara is currently based as a full-time professional voiceover actress in Los Angeles, but spent most of her life and career in the south (originally hailing from Lafayette and Greater New Orleans). Her experiences growing up as a multiracial talent have helped to shape her unique sound, perspective and relatability that comfortably speaks universally to listeners from a variety of diverse backgrounds.

Mara’s voice can be heard as the voice of AT&T, ION Plus and E! True Hollywood Story, among many others. In addition to her voice acting work, Mara also co-produces voice talent demos with her partner & fellow voice actor, Jordan Reynolds amongst the hills of beautiful downtown Burbank, California.


In addition to providing voiceovers for Democrats and progressives and mission-driven organizations, Mara is passionate about: