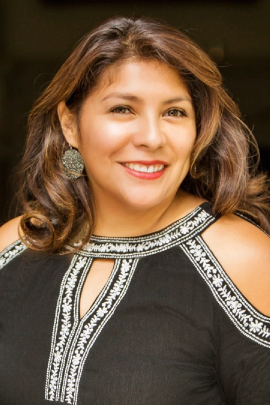 Sophia is a Mexican American bilingual English and Spanish political voiceover talent. Sophia is a first generation immigrant. Sophia has more than 15 years of experience as a voice over actor. Sophia’s voice has been heard for major companies like MGM Grand, Goodyear, Publix, JcPenney and Office Depot among many others. Sophia has recently voiced for Supermajority raising awareness on the importance of women empowerment.

Sophia is a full-time voice over talent and is available for you to help service your clients. Sophia is aware that this type of work can require immediate and same-day turnaround time frames and can be available after traditional business hours for urgent and rush jobs.

Sophia has all the latest technology to be live directed for voiceover sessions via SourceConnect, ipDTL, Phone Patch, Skype, Zoom or ISDN.

Sophia Cruz is a bilingual English and Spanish voiceover talent residing in Los Angeles, California. Sophia was born in Mexico and immigrated to the United States at a very young age. She was an illegal immigrant for the first 15 years of her life. She grew up in a traditional Mexican household but she also learned to integrate the American culture she experienced at school and with her friends. This has given Sophia a unique ability to not only be bilingual but also bi-cultural and understand the needs of both cultures especially when it comes to advertising.

Sophia is able to speak English and Spanish seamlessly and flawlessly with or without an accent. Spanish is the most spoken language outside of English in the United States. Mexicans make up over 63.2% of all Latinos in the United States, this is why Mexican Spanish is prevalent in the U.S. This is the type of Spanish Sophia speaks and is requested the most. She can also speak neutral Spanish as well as Latin American Spanish.

Sophia’s voice is mid-range which lends itself perfectly to voice for projects that want the natural and believable girlfriend, neighbor, friend, mother, wife, co-worker or entrepreneur. Sophia has passion and is always available to voice with her Latina flair when needed.

Sophia’s client’s frequently ask for her guidance on the Hispanic, Latino and/or LatinX market due to her extensive study, understanding and connection to this population. Sophia has studied marketing extensively which is why she is able to bridge the gap between what her clients needs are and the Booming Hispanic Market. In addition to being a Hispanic Market Consultant, Sophia also offers translation services when needed.

Sophia moved to Burbank, California two years ago after having lived in Chicago, Illinois most of her life. Burbank is home to many world renown studios and the backyard of the capital of entertainment, Hollywood. She and her Chihuahua dog Lester, a.k.a Lestie Bestie can be seen sunbathing and enjoying the beaches of California while eating mangos and drinking green juice. Sophia loves practicing Bikram Yoga and finds that the hot yoga room prepares her for long sessions in the studio especially during LA’s hot days in the valley.


In addition to providing voiceovers for Democrats & progressives and mission-driven organizations, Sophia is fiercely passionate about several issues on hand for the upcoming 2020 election. Sophia’s desire for immigration reform is personal. Having been an illegal immigrant for 15 years, she understands firsthand the difficulty and burden it is to be in that vulnerable state of existence in the United States. It wasn’t until President Ronald Reagan signed an immigration reform bill into law in 1986 that gave Sophia amnesty that offered her the peace of mind in becoming a legal resident and eventually a U.S. Citizen. Because Sophia has experienced the benefit of such a law and understands the positive impact it can have on many in her situation, Sophia is a strong advocate for finding solutions to the immigration crisis. Sophia’s major concern as a mother is for the ungodly abuse that is happening with the children in our country’s border. Children being separated from their families for extended periods of time while living in horrifying conditions that has led to death is simply an unacceptable practice in dealing with immigrants. Sophia also desires to use her voice to empower other women and the issues that many women face in our country such as equality in pay, adequate maternity leave and advocacy for women to understand and be educated on the decisions they make for their own bodies from a non-agenda point of view. As a single self-employed small business women owner, Sophia understands all to well the implications of not having affordable and adequate health care. Sophia desires to help others in her situation by finding a better healthcare solution to the needs of this demographic and others in a similar situation. Animal welfare is also incredibly important to Sophia and working with organizations that advocate for the transparency of animals matters greatly to her. As well as transparency when it comes to our food labels. Finally, Sophia recognizes that her own personal actions affect the planet and why she chooses veganism to help our planet with climate change and the animals we co-exist with and support our world.