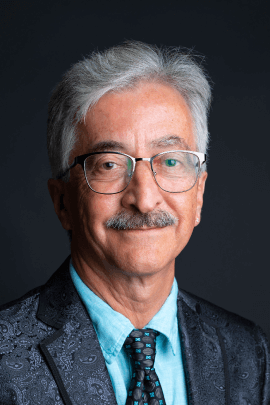 Brian is an award-winning professional political voice talent with more than 10 years' experience, completely bilingual in English and Spanish. He offers flawless, unaccented English or Latin American Spanish, Spanish with a slight Mexican accent, and Hispanic accented English. A native new Mexican, he specializes in English with an authentic Chicano accent. He has recorded projects for the ACLU, PBS, and NASA, audio tours and travel videos, and commercials for Democratic candidates and national brands.

Brian's studio is sonically treated to create the perfect balance of quietness and warmth. His studio gear includes Sennheiser MKH-416, Audio-Technica AT4040, and Warm Audio WA87 mics and Apogee Duet and Focusrite interfaces.

Brian can turn jobs around within 24 hours regularly, and can offer same-day turnaround on an as-needed basis.

Brian is available for directed voiceover sessions through Source-Connect, ipDTL, phone patch, Skype or Zoom, and can accommodate conference calls through phone patch.

Brian is an award-winning professional voice talent with more than 10 years’ experience. He is completely bilingual in English and Spanish. He offers flawless, unaccented English or Latin American Spanish, Spanish with a slight Mexican accent, and Hispanic accented English. As a native new Mexican, one of Brian’s specialties is English with an authentic Southwest Chicano accent. He is also the inventor of the “revolutionary accent-o-meter” (https://amadorbilingualvoiceovers.com/accentometer/), a widget which allows clients to choose exactly the degree of accent they need.

He has recorded projects for the ACLU, PBS, NASA and the Veterans Administration, audio tours for museums in LA, Albuquerque and Boston, and bilingual travel videos for Expedia. He has also voiced commercials for national brands such as McDonald’s, Schlotzsky’s and Budweiser and for the winning Democratic congressional campaigns of Martin Heinrich (Senate-NM) and Josh Harder (House-CA).

His other career is as a professional musician and songwriter. With his wife Rosi, he formed the acclaimed Latin band Sol y Canto, which recently celebrated 25 years of performing. In the run-up to the 2016 election, he composed and recorded the video of “No Way, Pendejo! (It isn’t gonna happen)”, a satirical skewering of the Trump candidacy. Unfortunately, “it” happened, and he is committed to using his voice and his music to try to keep it from happening again.


In addition to providing voiceovers for Democrats and progressives and mission-driven organizations, Brian is passionate about: immigrant rights, climate change and environmental justice, LGBTQ rights, reproductive rights, peace and security, and moving the United States toward an enduring and inclusive democracy.