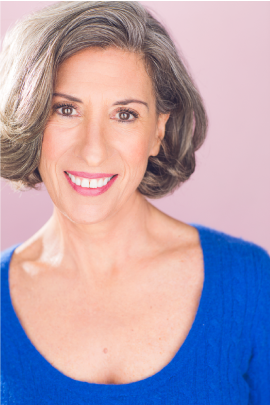 Debbie Irwin is an award-winning political voice actor with 20 years experience. She was the voice of The Statue of Liberty, and is recognized as an expert in medical narration. She has experience in documentaries, commercials, video games, and has even been the Voice of God (VOG) on award shows. Debbie has voiced ad campaigns for Cory Booker and Chuck Schumer. Fun Fact about Debbie: Her home has been featured on the cover of Country Magazine. Debbie regularly voices for The Democratic Party.

Debbie has a fully-equipped, sound-proof, home studio with only the best professional equipment in order to ensure none of the New York sounds make it into the recording: StudioBricks Booth, Sennheiser MKH 416, Neumann TLM 103, Sound Device USBPre 2, Adobe Audition, Twisted Wave, Izotope RX7.

Debbie prides herself on her commitment to produce high-quality, carefully crafted audio for her clients with quick turnaround times. She can even get your recording delivered on the same day if you’re in a rush.

Debbie is available for live, directed voiceover sessions from her studio over the phone, through Source Connect Standard, ISDN Bridging, Zoom, Skype and Phone Patch.

Debbie is a female voiceover tongue-twisting-text talent extraordinaire originally from Chicago. With part of her childhood spent abroad in Italy and Mexico, Debbie eventually moved to New York to pursue a theatrical acting career. Debbie’s wealth of experience extends to her work in public affairs at The Guggenheim and as a stock-broker on Wall Street. Ultimately Debbie decided to move to ‘Sesame Street’ to raise her three children in Tribeca.

Once her children were older, Debbie decided that her multi-cultural, multi-disciplinary, and actor expertise could be put to great use in voiceover. From that decision sparked wide-ranging and billowing voiceover career. Through hard work and commitment, Debbie has become the leading and trusted voice in medical narration. She has worked with companies such as AstraZeneca, Johns Hopkins, and Memorial Sloan Kettering to name a few. She also speaks at conferences about her expertise in the field in order to generate a greater understanding of medical narration.

Debbie has voiced audio tours for The Guggenheim, The Metropolitan Museum of Art, has voiced documentaries for PBS, commercials for Sephora, Pandora, and corporate narrations for IBM Watson and The National Library of Medicine. What clients love most about working with Debbie is her wit, openness to collaborate, and her ability to ask smart and detail oriented questions crucial to getting the clearest message across for their recordings. Her voice has the weight of experience, can be authoritative, warm, and professional, and sometimes light and sassy. Her love of language and story-telling is evident in each and every project she undertakes. She can even wow her clients when she flips from her Russian, British, Irish and stereotypical New York accents like it’s no big deal.

In addition to her commitment to her voiceover clients, Debbie enjoys to travel and learn about other cultures, she has a green thumb for flower gardening, is an art collector and frequent theater attendee. She has been a subscriber to the NY Philharmonic for over thirty years. More than anything, Debbie is devoted to her three children, her family and her friends and is immensely grateful for their support throughout her vibrant life. She’s especially grateful to the teachers and coaches who have continued to have a positive impact on her career. And although she feels she is much too young to be a “MomMom,” Debbie is most grateful for her grandchildren.


In addition to providing voiceovers for Democrats and progressives and mission-driven organizations, Debbie is no stranger to standing up for what she believe is right. In the 1960’s, back in Chicago, she took part in the Civil Rights and peace marches taking place in her community. She now lives across from City Hall where protests and marches are a nearly weekly occurrence. But it is through public discourse, and in holding our public officials accountable that we as a community can bring about positive change. Debbie is a member of the Freelancers Union that has helped to pass legislation in New York to protect freelance workers’ rights.. In a gig economy, people work numerous hours to make sure 9 to 5er’s lives run smoothly, but they have no claim to the protections and securities others benefit from; such as minimum wages and health care. Freelancers are often not compensated if they are injured on the job or are not able to report against discrimination or harassment. In the workforce today, countless pay their bills through freelancing and they should have access to the same rights as those in salaried positions. There have been countless legislations being pushed through congress that endanger Women’s Equality and Women’s Reproductive Rights. A women’s bodily autonomy and access to crucial healthcare should not be something that is at risk of being lost in America in 2020. It is of the utmost importance that we insure a woman's right to choose what happens to her body, so that she has the ability to choose the path that is right for her own future. Likewise in 2020, more than 50 years after the Equality Act has been brought before congress, the US constitution should state that a woman is equal to a man and is entitled to the same rights. Healthcare is a human right, and in a country that totes wealth and prosperity, it should be available to all. Debbie wishes for an end to the days where people need to resort to asking strangers to help pay for lifesaving treatment, or hearing of a neighbor going bankrupt because of medical bills and parents needing to ration insulin for their children. We should all demand a healthier America, one that cares for and takes care of it’s poor and sick community. Climate change is at the top of the list of threats to our country and our planet. We need a government that values jobs in clean energy and holds companies that are endangering our environment accountable. We need to reenforce laws that ensure everyone has clean air and water, and take the science of rising temperatures and rising sea levels seriously. More than anything, we as a nation need to come together as one community. Debbie has experienced how people can come together in a time of tragedy. Debbie still lives very near to Ground Zero and was in the city on 9/11. She and her family were among those that had to be evacuated from lower Manhattan, unable to return to her home for months. It was in the generosity of strangers that Debbie found the importance of working together as a community to bring about a positive outcome from a very tragic event. We can take all that we learned that day and on election day in 2016 and move forward as a community to bring about positive change.