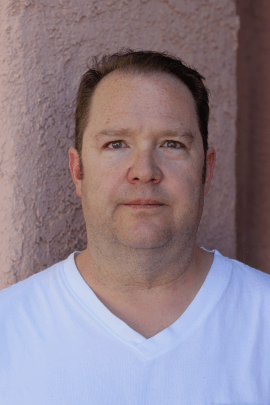 Dustin has been a full time political voice actor for over 15 years. He has done national TV and radio spots for many clients including Zaxby's and Nature Made Vitamins. He had the honor of seeing President Obama speak live twice in 2012 and regularly voices for The Democratic Party.

Dustin is a full-time voice actor and can offer immediate and same-day turnaround. He's also available outside of normal business hours for urgent and rush jobs.

Dustin has a Telos Zephyr xStream ISDN codec and Source-Connect for client voiceover sessions. He also offers a phone patch for clients to listen in while he's self-recording. He is also available via iDTL, Skype, Google Hangouts and Zoom.

We Play For Vegas

Dustin voiced his first radio commercial for a local bank at the age of 4. At that time he couldn’t have known radio would become his career for 20 years, but it did. From there, he transitioned into voice acting. He had to unlearn some of the things he did in radio, but the technical and recording knowledge have served him well.

He has been a full time voice actor for 15 years and has voice commercials and projects for clients like Coca-Cola, UPS, Zaxby’s Chicken, Tiffany & Co., Ferrari, Nature Made Vitamins, Niagara Water and many others. He enjoys the unique nature of his job and all the wonderful people with which he’s privileged to work on a daily basis.

Dustin is proud to be one of the four founders and first President Emeritus of the World-Voices Organization, an industry association for voice actors around the world. He’s passionate about mentoring new and upcoming talent on a weekly basis, giving freely of his time to those who need a hand.

He is a fan of the Kansas City Chiefs football team, and thus has been disappointed for 50 years, but finally, his persistence has paid off! He is also the captain of his men’s 3.0 USTA tennis team and enjoys living in Las Vegas with his beautiful wife. He is blessed with several dear friends, many who have helped him along his life’s path. For this, he is eternally grateful.


In addition to providing voiceovers for Democrats and progressives and mission-driven organizations, Dustin is very concerned about climate change and finding a sustainable solution for our energy needs that does not include coal, gas and oil. He's also interested in finding a healthcare solution that leaves no American without basic medical care, which he believes is a human right, not a profit center for corporations. He believes the single most important thing for this election cycle is making sure Donald Trump no longer occupies The White House.