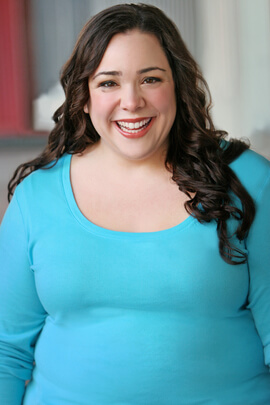 As a political voiceover talent, Maria has voiced for candidates like Maggie Hassan, Jill Karofsky, Alex Askew, the Biden/Harris campaign and other winning Democrats. Maria offers a quintessential conversational and relatable read that skews youthful and resonates with millennial and Gen Z ears.

Maria was honored to win two Voice Arts Awards and she was nominated for a 2019 Reed Award for "Best Use of Voiceover Talent" for a progressive mayoral campaign in Florida. Maria makes a mean spaghetti sauce and her other fun fact is that she was on a recent episode of HGTV’s flagship show, “House Hunters” with her husband, Eric.

Maria offers fast political voiceover production and recording from her dedicated home studio and regularly voices for the Democratic Party.

Eastern Standard Time (EST, GMT-5). Maria is a full-time voice talent and can offer immediate and same-day turnaround. She is available after traditional business hours and on weekends for urgent voiceover sessions and rush jobs.

Venue Concierge by The Knot

Maria Pendolino is a professional female voiceover talent from Buffalo, New York. For political voiceover spots, you can count on her to be the trusted, warm & friendly voice for a candidate’s image ad. Or, a firm, authoritative and aggressive voice for an attack or negative spot. As a talented voice actor, you can count on Maria to deliver a real read for first-person and citizen testimonials. Maria is skilled in political voiceover recording and production and is proud to be one of the best Democratic voiceovers around.

Maria built her career as an actor in theatre, television and film before finding a cozy home in the voiceover booth. During her career, she has acted in over 40 stage plays and musicals, appeared on Lifetime’s hit drama “Army Wives” as a recurring character, was a guest re-enactment star on Nat Geo’s addictive series “Locked Up Abroad” and played the hilarious lunch lady Eunice on Cartoon Network’s teen series “Team Toon.” She was also in the hit Bollywood movie “English Vinglish” that premiered at the Toronto International Film Festival.

She jokes that she “retired” to upstate/Western New York for the real estate, but as a bonus, she also got to be closer to her large (and loud) extended Italian and German families.

Maria began her freelance voiceover career in 2010 and since then has worked with brands, production companies and studios around the globe to bring their diverse content to life. Maria specializes in voiceover for television and radio commercials, pre-roll streaming commercials and social media advertising, internet radio like Pandora, Spotify and iHeart Radio, explainer videos, e-learning and educational content, corporate narration, political voiceover, live announcing (Voice of God) for awards shows and conferences, in-app narration, voiceover for AR and VR experiences, telephone systems and IVR, radio imaging (CHR, Hot AC, Adult Contemporary, Country, Rock) and she is also a master of character voices and accents and regularly provides voices for animated characters, interactive and video games. Maria had the honor of narrating the audiobook for her sister’s smash title “Wedding Planning for the Busy Feminist”, which is available on Amazon and Audible.

Maria’s voice is mid-range to low tones – perfect to represent the girl next door, the young mom, your female coworker, the girlfriend, the
wife and the impassioned young woman.

Maria lives in the suburbs of Buffalo, New York with her husband Eric, a GIS Mapping Consultant (read: A Map Nerd) and their three rescue cats: Two Scoops, Nellie and Mozzie.


In addition to providing voiceovers for Democrats and progressives and mission-driven organizations, Maria is passionate about several issues on the Democratic agenda and is proud to be a Democratic voiceover for change. She is happy to offer discounts to 501c3 and 501c4 organizations to help them get their messages across.

At the center of her personal advocacy and charitable giving is Women’s Reproductive Rights and Health. Maria believes in the work done by Planned Parenthood and other organizations in this space. She is also passionate about working hard to close the gender pay gap and fight for feminism and gender equality.

As a descendant of German and Italian immigrants, Maria is proud of the work immigrants have done to build our country up over the previous decades and is passionate about finding a solution to the current humanitarian crisis at the borders.

Healthcare is a central issue. Maria would like to see the Democrats formulate a proposal that allows the millions of uninsured and underinsured Americans to have access to quality, affordable healthcare and end the “GoFundMe” and bankruptcy circus that has become medical debt and healthcare financing for millions of Americans.

As an adoptive pet parent, Maria is also very passionate about legislation that makes the sale of domestic and exotic animals illegal and promotes the adoption model over the breeding mill / pet store model. She is also a supporter of Trap-Neuter-Return (TNR) to help control the stray & feral cat populations.

Maria is a fierce ally of the LGBTQIA+ community. She is passionate about ensuring that LGBTQIA+ individuals feel safe, supported and maintain the same rights as everyone else.

Finally, none of the above will matter if we don’t have clean air to breathe and fresh water to drink. Maria supports legislation and candidates that make climate change an important part of their platforms. Maria would like to see the United States take steps similar to the Scandinavian countries in reducing single-use plastics and containers and work to reduce emissions across the board. Maria also supports organizations like the World Wildlife Fund, the Sierra Club, the National Parks Foundation, Nurtured by Nature and more.