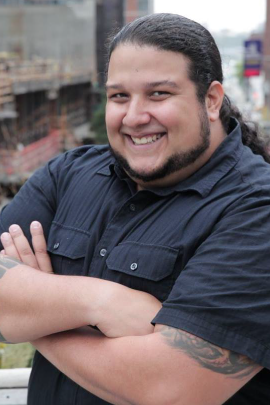 Robb is a full-time, bilingual, male political voice over talent. Robb has voiced hundreds of commercials and has long standing contracts with large scale companies like Giorgio Armani, Papa Johns and Yves Saint Laurent. Other companies that have benefited from Robb's voice in both English and Spanish were Chase, McDonald's. Jackson Hewitt, Trident, Google, Hasbro, AT&T, Lavazza and many more! With 18 years of theater experience and the better part of a decade behind the mic, his clients always know they are in good hands. Robb regularly voices for the Democratic Party.

Robb is a full-time voice talent and can provide recordings with a 24 hour turnaround and is readily available after normal business operating hours and for anything urgent or rush as needed.

Robb Moreira is a full-time, bilingual, male voiceover talent from Queens, NY. He began to take his acting serious in his teens when he auditioned and was admitted into the LaGuardia Highschool for Music, Art and the Performing Arts where he completed four years of conservatory training in theater, improv as well as voice and diction to make sure his “New Yawk” accent was neutralized. Robb then continued his studies at the American Academy of Dramatic Arts where he completed three years of conservatory training to further his craft as an actor.

After nine years of Off-Broadway shows as well as Off Off-Broadway, the theater world began to be difficult to be a part of with his growing family. Through happenstance, a fellow stage actress mentioned the possibilities of voice acting and provided Robb with the tools and advice to get a career started.

As his career has grown and his business has flourished, Robb moved to Long Island to provide a better community for his family. In his office, he has successfully transformed it into a professional voice studio with all the trimmings. A professionally manufactured sound booth that he (painstakingly) put together himself. Robb made sure to get top of the line microphones and sound absorption to assure his clients would get professional grade work from him at any time during the day. Speed and efficiency are trademarks of Robb’s brand.

Six years later, Robb has become a staple in the New York voice acting community. He specializes in commercial work where his clients have found an immense benefit in his ability to speak both English and Spanish neutrally and fluently as well as being able to add an accent if needed. This versatility has garnered him work with companies like Lunazul Tequila, Volcan De Mi Tierra Tequila, McDonalds, Giorgio Armani, Yves Saint Laurent, Makers Mark, Jackson Hewitt, Goldman Sachs, Trident, Google and Hasbro among many others.

Besides commercial work, Robb has had the pleasure of voicing IVR for several companies, e-learning courses, training videos/tutorials, audiobooks, ADR for several hit Amazon Prime shows, dubbing for many anime films and series, and video games where he has played soldiers as well as insane, murderous, billionaires. Needless to say, Robb’s career has been very entertaining, to say the least.

While Robb spends the majority of his time recording for his clients, he also finds time to coach up and coming bilingual talent in the field. He imparts his knowledge and hopes to assist in the growing careers of several talent. Robb also runs a YouTube channel where he uploads videos weekly speaking about different facets of voiceover. Be it microphones, state of the business, or general tech to keep an eye on.

Robb lives in Levittown, NY with his wife Angella, a professional travel agent and his three daughters, Aida-Lynn, Ariella, and Robyn.


In addition to providing voiceovers for Democrats and progressives and mission-driven organizations, Robb is passionate about: