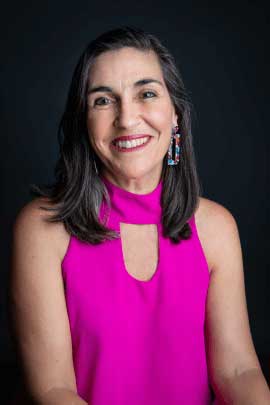 Rosi is an award-winning political voiceover talent, offering flawless, unaccented English and Latin American Spanish. Upon request, she can add a Hispanic accent to her English or a Puerto Rican accent to her Spanish. Rosi is the Spanish voice of Mattress Firm, and has recorded for the Smithsonian, the ACLU, PBS, FEMA and Oxfam. In the political arena, Rosi has voiced for candidates like Deb Haaland and Bill Nelson as well as a national campaign for Dreamers’ rights.

In addition to being the voice of several retail and boutique brands, Rosi specializes in delivering what her global clients describe as her warm, enthusiastic, sparkling, friendly and expressive voicing style for a wide variety of genres. From bilingual commercials, PSA's, eLearning modules and corporate narrations, to museum and tourism audio, Rosi serves up her English, neutral native Latin American Spanish and Hispanic-accented English on demand.

Rosi's studio is treated to offer a perfect combination of quietness and warmth. Her recording gear includes Sennheiser MKH416, Audio-Technica AT4040 and Warm Audio WA87 microphones and Apogee Duet and Focusrite interfaces.

Rosi can connect to clients for directed voiceover sessions through Source-Connect, ipDTL, phone patch, Skype or Zoom. She can also accommodate conference calls through phone patch.

Rosi is an award-winning full-time, English/Spanish voice talent. A transplanted Latina, she is originally from Puerto Rico. Now based in Boston, she works globally, and is one of the top U.S. providers of voiceovers in flawless, unaccented English or Latin American Spanish and in Hispanic accented English. Bilingual and bicultural, the child of a Puerto Rican mother and an Argentine father, Rosi can add a Puerto Rican or Argentine accent to her Spanish on demand. With her husband Brian, she is is the co-founder of Amador Bilingual Voiceovers.
Rosi is particularly adept at voicing content related to Hispanics and the Spanish language. She is often hired by clients who are looking for a celebrity sound and read like Salma Hayek or Sofia Vergara. Her naturally warm and happy voice is frequently booked for healthcare, public service announcements and nonprofits, with a compassionate call to action. A natural storyteller, she has also narrated dozens of children’s audiobooks, including several that have won highly respected awards in the educational realm.

Rosi’s voice is in the middle to lower range – frequently representing the 30’s-50’s female coworker, executive, mom, best friend or wife, or the compassionate, friendly female doctor.
Rosi is the Spanish voice of Mattress Firm. She has also recorded for the Smithsonian, PBS, the American Cancer Society, NASA, Discovery Familia TV, FEMA, The Children’s Hospital of Philadelphia and Oxfam. She has recorded audio tours for museums across the country as well as travel videos for Expedia. In 2018, she won the prestigious SOVAS Voice Arts Award in the category of “Outstanding Commercial Demo Reel.”

In the political arena, Rosi has voiced for candidates like Deb Haaland (NM) and Bill Nelson (FL) as well as a national campaign for Dreamers’ rights.

In addition to her voiceover career, Rosi is a professional singer and co-founder
of acclaimed Latin music groups – first Flor de Caña, and later Sol y Canto, which recently celebrated 25 years of performing. She is occasionally asked to contribute her beautiful singing voice to voiceover projects.


In addition to providing voiceovers for Democrats & progressives and mission-driven organizations, Rosi is passionate about many issues, among them the plight of the separated families at our country's border, environment, women's reproductive rights, immigrant rights (particularly that of the Hispanic population) and judicial and educational reform. As the mother of a trans son, she also has a strong interest in LGBTQ equality. Rosi is passionate about issues related to Puerto Rico - her people.