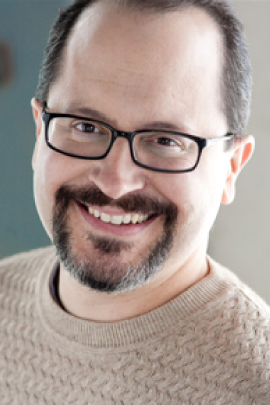 Tom has been the voice of dozens of spots for Democratic Party candidates across the country since 2008, including many spots on behalf of End Citizens United. As a political voiceover talent, his favorite from 2018 was a spot for Colin Allred, who upset longtime GOP Rep. Pete Sessions in deep red Texas! Fun Fact: Tom turned down an offer to voice for Carly Fiorina in 2016, since he only works for Democrats.

Tom has operated his own broadcast-quality studio since 2003, complete with isolation booth and top-notch gear like Sennheiser 416 and Gefell M930 mics.

Tom offers extremely quick turnaround of 0 – 4 hours, and rides with a portable recording studio in his car whenever he is away from his studio for more than one hour. Tom is available 24/7 for urgent requests. Voice-over is 100% of his business, and the vast majority of Tom's work is recorded from his studio.

Tom uses Source Connect Standard, and also has access to an ISDN studio in downtown Chicago that charges a nominal fee of $100. Of course, Phone Patch, Skype, Google Hangouts and Zoom are always options for directed voiceover sessions as well.

Fighter For You (TV Version)

Tom Test was born to parents who were raised in rural Pennsylvania (Punxsutawney, to be specific!), but moved to the Detroit area in 1960 to find better economic and educational opportunities for their children. His father owned a successful auto body shop business and created spectacular hot rods that often appeared in the pages of industry magazines. Tom moved from his blue-collar upbringing to graduate with a BBA in Marketing from the University of Michigan/Ann Arbor, where he paid his way through college on his own by working in restaurants along with scholarship money from his SAT scores. He could not have made without also enjoying the benefits of Pell Grants and Guaranteed Student Loans. He is the first member of his extended family to graduate from a state college.

Tom became a full-time voice talent in 1994, and has recorded enough national spots over his career that it is very likely you’re heard him before. He is often cast as the “warm and authoritative” voice of hospitals and banks, but is versatile enough to be cast in real person and dialogue spots, as well energetic retail campaigns. One of his retail campaigns won an award for “Watchability,” defined as “willingness to watch the entire spots, rather than change the channel.” Tom has appeared both on- and off-camera on numerous campaigns that have won Telly and other advertising awards.

Tom’s voice has been described as ageless, and has recently been cast as young as “25-35” and as old as “senior citizen on Medicare.” He has great vocal agility that makes him extremely directable.

You may have heard Tom’s voice for the Leatherman Tread multi-tool on YouTube, described by one newspaper as “uber-masculine.” He has recorded hundreds of spots heard on Radio, TV, Pandora and other streaming services for clients like Coke, Toyota, Quilted Northern, Humana, Bonefish Grill, Rent-A-Center, Bank of America, Benjamin Moore, Disney, Williams-Sonoma, and Yelp Eat24. Tom has also voiced corporate narrations and training programs for Fortune 500 firms such as GE, Boeing, Shell Oil, USAA, Lockheed Martin, Chase Bank, Southwest Airlines and Samsung – and many more.


In addition to providing voiceovers for Democrats & progressives and mission-driven organizations, Tom’s number one priority is ensuring the philosophy of “one person, one vote” is restored, so our nation can enjoy a truly viable representative democracy. “One person, one vote” has been eroded by gerrymandering, thinly-veiled voter suppression tactics, dark money flowing into campaigns due to the Citizens United ruling, and of course, the anti-democratic effect of the Electoral College. Tom has very proudly recorded dozens of radio and TV spots for candidates nationwide on behalf of the End Citizens United PAC.