Political Commercials in the Time of COVID-19

As someone who has worked in the medical arena for years, I’m asking myself what happens when a pandemic is on the ballot? After lending my voice to medical narration videos, commercials, eLearning, and more, I understand the importance of making healthcare information:

I have been a voiceover actor on projects ranging from instructional medical device videos for physicians, to hospital videos for patients, to pharmaceutical commercials for the general public, and all of those projects have had one common trait: clearly articulated information can be a huge comfort in complicated and frightening times.

The Benefits of Well-Crafted PSAs

With COVID-19 affecting every state in the nation, doctors, nurses, and citizens need to be kept informed of new regulations, what symptoms to look for, and which safety precautions to implement.  The only way for vital information to reach our most vulnerable is through public service announcements, or PSAs. There is no question that poorer communities, communities made up of people of color, and undocumented immigrants are affected at a greater rate by the current crisis — even moreso because those demographics include lots essential workers on the front lines providing food and package delivery, bus drivers, grocery clerks, poll workers, journalists, and farmworkers, just to name a few. They might not have the same access to healthcare or basic information on crucial ways to protect their health, and are much likelier to be pressed into working through an illness, or going back to work before they’re fully healthy.

Beyond public health commercials, we can expect the news cycle will be focusing on the Coronavirus for months to come. It has already changed the way we live and communicate with one another, which inevitably means political campaigns and causes will be talking about the virus as well. Political commercials across the country will be asking constituents to hold their representatives accountable for the handling of the coronavirus response and the lack of implemented safety policies. There will be advocacy groups and relief organizations asking for money to help those struggling and remote volunteers. Although the news cycle is typically in a state of flux, the pandemic, and our economy as a result of it, will be the framework for how PACs, candidates, campaigns, and causes will be crafting their messaging to reach voters in their districts. 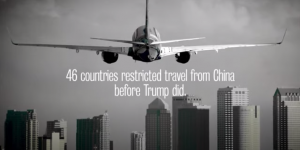 The messaging behind these political commercials will have to be crystal clear. Take for instance, the political advertisement entitled Bungled. This particular political commercial focuses on the president’s slow decision to limit travel to and from China in the early days of the Coronavirus when several other countries were already doing so. The advertisement uses the president’s delay in issuing a China travel ban as one example of how he has made the country less safe, and it ends with a literal call to action, providing a phone number to tell the president to enact policies that will protect the American public.

Creatively, the ad is mostly black and white, which is suggestive of newspapers and the early years of TV, and the tone of the woman’s voiceover is very newslike. All of these creative choices send meta-messages to the viewer that this is critical information… that there’s no disputing it, as the evidence is “black and white.”

We should expect ads like this to pop up from both sides of the aisle. Messaging will need to be clear, on whom to hold accountable for the current crisis, and whose efforts should be praised. No doubt, the president will move his message from his daily press briefings to political advertisements, as we move closer to November and the 2020 election.

What’s Next for Political Commercials in the Pandemic?

Regardless of where anyone stands on the aisle, it is extremely crucial that we take measures to protect our public health. Political commercials must provide accurate and scientifically proven protective measures the public can easily implement. They must inform citizens of who they should hold accountable for mishandling the crisis in their own states and the federal government, as well as who to support for their efforts in helping the people of the United States. We will rely heavily on commercials in 2020 more than in any other election year.

Our health will be on the ballot.