We’ve started a new series to introduce you to our talents by going even more in-depth than their profile listings. So, Meet Joey Schaljo, Blue Wave Voiceover Talent!

My home studio consists of a Studiobricks isolation recording booth (painted a lovely Agate Gray color), a Neumann TLM 103, an Avid Mbox Pro, a Macbook Pro computer, and I read off of an iPad. I live in a small one bedroom apartment in New York city so I don’t have the luxury that other talents have to put their booths in separate room or in their basements, mine is in my living room (but according to my sister it blends in nicely with the rest the decór…thanks sis). One of the things I love about my booth is the second I step into it I feel energized and read to conquer the day.

At 5’10” I’m one of the shortest people in my family. I basically come from a family of giants.

I came to New York to get my MFA in acting, upon graduating I began auditioning for everything I could. My first bit of success came in live announcing and voiceover. After that I was hooked and I’ve been a voiceover actor ever since!

My very first voiceover job was a political spot! It was a positive candidate introduction spot for a person running for office in my home state of Illinois…they went on to win…so maybe I’m good luck! 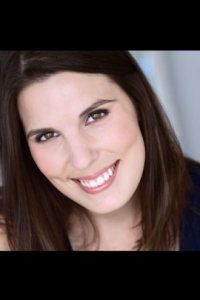 Like all forms of advertising, political advertising is about storytelling and one of the quickest ways to get an audience to connect with your story is through the voice. So much nuance can be communicated in tone, cadence, and delivery style of a voiceover talent, it’s why we humans have been telling (and loving) stories for centuries. Specifically in this moment right now I think voiceover is crucial to the 2020 election because we have more channels to communicate our story through than ever before. One thing almost all those channels have in common is audio in some form, and that is why voiceover and the quality of the voiceover artist will be key.

I would recommend that voiceover talents fully recognize political as is own separate genre of voiceover and treat it as such. This means studying the different types of spots and reads, and getting good at things that political commercials require such has quick shifts in tone, speed reading end tags and disclaimers, and how to go negative without losing the listener. There is definitely an art to this type of work and sooner an new voiceover talent absorbs it the better.

When I step outside of my booth I don’t stay home much. I like to travel, be outside in nature, and visit family and friends. I find knitting relaxing and therefore will force hats and scarves onto the people I love. And I have a fascination (bordering on obsession) with Abraham Lincoln.

If you’d like to book Joey Schaljo on your next political voiceover project, please visit her profile here and get in touch!