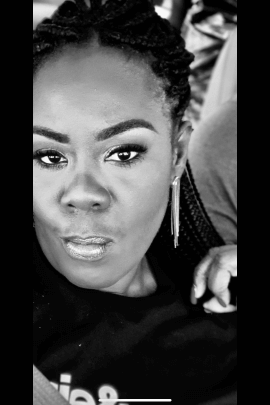 Kesha is someone who lives, dreams & breathes everything voiceover. She has been a media professional, political voiceover talent and radio personality for over 20 years. The transition for Kesha to being a full time voiceover talent was a natural one. She has voiced projects for brands such as: Dreamworks, Busch Gardens, SeaWorld, Coca Cola, Dunkin Donuts & more. One of the highlights of her career was being the live announcer for a major fundraiser for Emily's List in the nation's capitol.

Voiceover is Kesha's full time focus. She can provide instant accessibility and is highly committed to completing your project no matter the hour or the day of the week.

Kesha Monk is a native New Yorker who has been fascinated with hearing her voice on recording devices since she was 7 years old.

Kesha’s professional career began as a radio personality in Raleigh, North Carolina. Her talent took her to many cities across the country including major markets such as New York, Los Angeles, Chicago & Boston. Additionally, she was the co-host of a syndicated countdown show with Randy Jackson of American Idol fame. The show ran for 5 years and aired in 50 US cities and internationally in Japan and Kenya. After 20 years in radio, her career path shifted after a devastating cancer diagnosis.

During a chemotherapy break, Kesha decided to enter a contest that was awarding a hefty voiceover contract. Coincidentally, her actual audition was a script that included a role of a cancer patient. Because cancer was her reality, that audition got her in the door of a reputable talent agency and catapulted her into the world of voiceover.

Since then, Kesha’s cancer has returned multiple times – however, her experience has helped to develop a remarkable resilience. Her ability to connect with content and her ability to bring projects to the message being conveyed to the listener has made her a voice talent to be reckoned with. She has recorded projects for global brands such as Mcdonalds, Dreamworks, Busch Gardens, SeaWorld, Coca Cola, Chick Fil A, Dunkin Donuts and more. She has narrated a children’s audiobook and has been the signature voice for a host of corporate and industrial videos. Kesha recently completed her 3rd season as the continuity voice for POV, a weekly documentary series that airs on PBS. She also is the live announcer for the Soul Train Awards which airs on BET, the most prominent television network targeting African American audiences.

Kesha’s voice has extraordinary range and tremendous versatility. Her voice is well suited for projects that require a professional dynamic as well as those that require more of a conversational, genuine and natural read. Her reads are often described as warm, rich, trusting, confident, believable, compelling & inspirational.

Allowing Kesha to voice your project is a breeze; as she takes direction extremely well and can appropriately adjust her performance to your needs.


In addition to providing voiceovers for Democrats and progressives and mission-driven organizations, Kesha is passionate about: