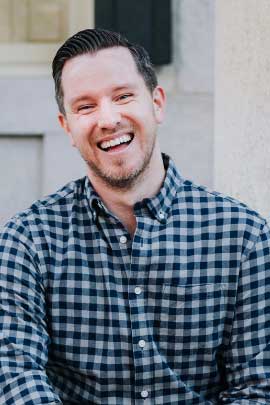 Kevin is a professional theatre and voice actor based in Providence, RI. As a member of the queer community, he has proudly voiced for iHeart Radio’s PRIDE Radio and "RuPaul’s Drag Race All Stars” radio spots, as well as voicing a role in Nightgowns: The Musical created and produced by “RuPaul’s Drag Race” Season 9 winner, Sasha Velour.

Additional clients include The National Parks Service, Egress Software Technologies, Festival Ballet Providence, The RI Women’s Choreography Project and more. Kevin has performed onstage in 45 states and three different countries with Broadway’s Jersey Boys and also knocked the judges out of their seats on Food Network’s “Bakers vs. Fakers!”

Kevin also works in other genres including commercial, e-learning, explainer videos, telephony/IVR and lends his singing voice to jingles, animation, and toys/games.

When not touring with Jersey Boys, Kevin can offer a 24-hour turnaround on most projects. While he is on the road, he can often offer a 2 business day turnaround from his travel recording set up.

Subject to his touring schedule, Kevin is available for remote directed sessions via Phone Patch, Zoom, Skype, and FaceTime or, with ample notice, from a studio equipped with Source Connect.

Kevin Patrick Martin is a professional musical theatre actor and voice actor based in his home state of Rhode Island. After a 15 year career in professional theatre and nine years living in NYC, Kevin relocated back home (as many did) during 2020 and began his professional voice over career.

Kevin’s stage credits include over 600 performances with the National Tour of Broadway’s Jersey Boys. Having joined the tour in 2017, Kevin has performed in three countries and 45 of the 50 states and he is on his way to crossing a few more states off the list as Broadway tours begin to open up again. Additional stage credits include Oklahoma! at Trinity Repertory Company (directed by Richard Jenkins), A Christmas Carol ’10-’13 and Spamalot at North Shore Music Theatre, 42nd Street (5 productions), Crazy for You, Assassins, Les Miserables, La Cage Aux Folles, Showboat, Thoroughly Modern Millie, The Producers and many more.

A proud member of the LGBTQia+ community, Kevin has voiced for various queer-centered projects. He is passionate about LGBTQia+ rights and aims to support businesses and candidates whose values align with his own. His warm, genuine voice lends itself perfectly to advocating for members of marginalized communities.

Outside of performing, Kevin has found a good deal of success as a baker, having fooled the judges and literally knocking them out of their seats on Season 2, Episode 1 of Food Network’s “Bakers vs. Fakers” (FYI: he was a “faker!”) Other passions include floral design, DIY-ing, cooking, and all other things that will come in handy as he plans every single aspect of his October 2022 wedding to his ballet dancer fiancé, Alex.


Kevin is passionate about many issues that we are confronting in the 21st century, including, but not limited to: