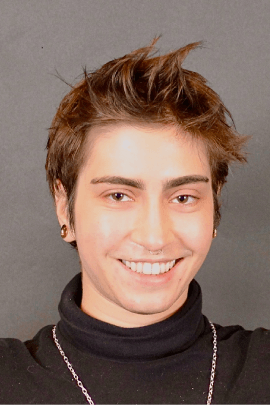 Zia is a professional millennial transgender Latino male political voice talent. He speaks English with a neutral North American accent and neutral Latin American Spanish. Since age 15, he’s recorded audiobooks, commercials, audio tours, web videos, and educational and medical narration, in English and Spanish. Zia’s voice is in a middle register, and he can sound like a young male or a person of indeterminate gender. Studio Details Zia records in the studio of Amador Bilingual Voiceovers, which is treated to offer a perfect combination of quietness and warmth. The recording gear includes Sennheiser MKH416, Audio-Technica AT4040 and Warm Audio WA87 microphones and Apogee Duet and Focusrite interfaces. Turnaround Time Zia is a full-time student and does not have daily access to a studio. He can generally submit recordings within 2 business days. Connection Details Subject to his school schedule, Zia is available for remote directed voiceover sessions via SourceConnect, ipDTL, Phone Patch, Skype, and Zoom.

Zia started his voiceover career in 2011 at age 15, as the protagonist in a children’s audiobook recorded in both English and Spanish. Since then he has recorded bilingually for Pandora Radio commercials, audio tours for youth for the Smithsonian Institution’s National Museum of African American History, educational narrations for Scholastic, web videos for the Boston Water & Sewer Commission, and medical narrations for animated patient video tutorials, to mention a few.

Since his transition, Zia has voiced young male voiceover roles in educational apps like StudySync and training videos to inform teenagers about sexual harassment. His voice is in a middle register, and he can sound like a young male or a person of indeterminate gender. He responds very well to direction.

Zia is passionate about many things outside the voiceover realm, including music, visual arts, cooking and bicycling. He is currently studying at the Massachusetts College of Art in Boston. Issues of particular importance to him are trans rights, LGBTQ issues, health care access, and the environment.