We’ve started a new series to introduce you to our talents by going even more in-depth than their profile listings. So, meet Maria Pendolino, The Blue Wave Voiceover Talent! 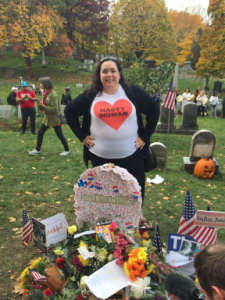 Sure – my professional voiceover studio is located just outside of Buffalo, New York! I built my career in Manhattan and then I joke that I “retired” upstate to Western New York for better real estate costs! My StudioBricks OnePlus (in custom color Indigo!) with a Neumann TLM-103 is my daily microphone. I also have a Sennheiser MK416 and I run an Audient ID14 through a pro-Mac Suite. My office and studio are at the back of my house and I look out over our back forty – we’ve got all sorts of wildlife that jog by my studio windows all day long. My cats love bird watching.

That I was on an episode of HGTV’s House Hunters. You can find it streaming – it’s called Battle for A Basement in Buffalo! The episode actually features information about me being a female voiceover actor!

I started my acting career working in theatre, TV and film. Voiceover was originally just a way that I was trying to make money in between my legit bookings. Then I realized how much I LOVED doing voiceover work and it actually became my primary acting genre.

Yes, I did a phone recording in college for a survey company and was one of those “Press 1, Press 2” telephone and IVR voices. I had no clue what I was doing and I made like $35 and I was thrilled. 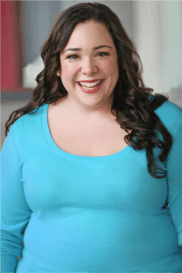 Yes – it was for a Democratic state legislator in New Hampshire. I was really proud to be a female political voiceover artist advocating for a female candidate.

I recently performed the voiceover on political spots for Jill Karofsky who won the Wisconsin Supreme Court seat earlier in 2020 and was really proud of voicing that campaign. I’m excited to see more women running and winning office. In the non-political sphere, I did a campaign for Dannon Two Good Greek Yogurt that is really funny. I also did an educational voiceover series for the Boston Public Health Commission about how to wear male and female condoms. I’m really passionate about reproductive justice, so that was a cool project to work on.

People want to be able to connect with authentic voices. I think the stereotypical booming “old man” voices are just not going to cut through in a crowded and very divisive cycle. I’m excited to hear more female political voiceovers on the air and also more diverse voiceover talents like African American voiceover talents and bilingual Hispanic talents as well.

When the visuals are already locked to a scratch track that was read by someone with no performance and emotion. It’s difficult to bring a realistic performance to life if you’re trying to fit your timing and pace into someone else’s very monotone read. I like to have a little flexibility and space to bring words to life.

If there are any spots on my demo that have the tone or pace that you’re aiming for – let me know! It’s super easy for me to listen back and then replicate that sound on your script.

Have a great studio and have great availability. If you’re a voiceover hobbyist, the political genre is not for you. You need to be available 24/7!

If you’d like to book Maria Pendolino on your next political voiceover project, please visit her profile here and get in touch!