We’ve started a new series to introduce you to our talents by going even more in-depth than their profile listings. So, Meet Tom Test, The Blue Wave Voiceover Talent! 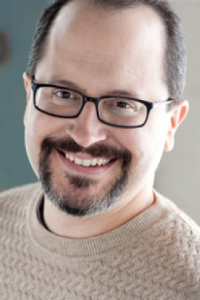 I’ve had my own broadcast-quality home studio since 2003. It includes an isolation booth, industry-standard microphones like the Sennheiser 416, AT4050, Gefell M930, etc. Several studio pros have told my my sound is excellent, and I’ve recorded national TV spots from here.

The BEST part about my workspace though, is how I’ve made it my own slice of geek heaven! I’ve got 50s-60s sci-fi movie posters, 70s vintage stereo gear (including THREE turntables) and a collection of jazz on vinyl, plus my display of plastic airplane models – a relaxing, satisfying hobby I’ve enjoyed since I was a boy. I just wish I had more room for my geeky collections!

“Test ” is the last name I was born with – the original family name used to be “Testa,” which is Italian. It is a memorable name, but not so good with Google searches. Also, I have many, many problems with the fact that “test” is often used as a fake placeholder name for testing and training purposes. People and computers don’t think I’m a real person! In fact, I was the subject of a front-page article in the Wall Street Journal in 2014 about people with similar issues, with last names such as “Sample,” “Doe” or “Null.”

I discovered in my Freshman year at the University of Michigan that I had a real knack for public speaking. Then I found out that people really liked the sound of my voice. And my reading comprehension skills have always been way off the charts. After my brief-yet-miserable career as a corporate zombie, I quit that world, moved to Chicago, and started taking voice-over, acting and improv lessons. I started from absolute zero, having never done anything remotely like this before (neither had anyone from my blue-collar family). I faced total rejection at first, but persevered. The BEST thing I ever did was to organize weekly voice-over workout sessions at a local studio, which is where I got the experience to become skilled enough to compete. And after 6 1/2 years of waiting on tables, I finally managed to become full time in 1994. You shoulda been there for my apron-burning celebration after my last shift! 🙂

A radio campaign for a sporting goods store. I played a teenager who was super-pumped about my new Adidas shoes. A nice gig, actually!

I’ve been doing this over 30 years now, and sadly cannot recall. But all along, I’ve worked for Democrats only. I even turned down a chance to work for the Whitman campaign in 2016.

Hmmm, so many to choose from. Well what came to mind first were the most fun sessions I’ve had. Perhaps it was the radio campaign for Embassy Suites Hotel, where I played a very sardonic character who was spec’ed as “Alex Baldwin-ish.” Great copy, which makes all the difference in the world!

For better and for worse, people don’t seem to vote purely on issues and policies. They seem to be swayed most by “who really hears my concerns? Who sounds like ME? Who can I trust?” And all of those questions are answered by the VOICES they hear in political spots.

“One person, one vote.” It is the centerpiece of our democracy, and has been relentlessly attacked by the GOP. Trump himself admitted “You’d never see another Republican elected to the White House” if not for their voter suppression efforts. Stacey Abrams has done some great work in Georgia on this, and Sen. Kamala Harris has sponsored a $5 billion bill to permit a 2 week in-person voting period as well as mail-in-ballots for all on demand.

Please tell me: who is this aimed at, what matters to this audience, and what is the emotional pull here – what is the “big picture” emotional need we’re trying to address in this spot? (E.g., education isn’t just about education – it is about “hope that our children will have a better life than we do”). 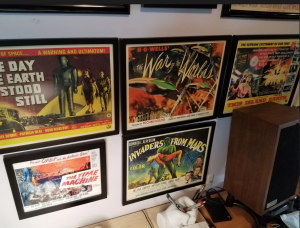 First, pick a side. Second, know that political ads are cast differently than other TV/Radio/Web spots, so you’re going to need to hustle to sell yourself on your own. Third, invest in a specialized Political demo, don’t just use your generic Commercial demo.

Answered above! 70’s stereo gear (I have a big collection from every major brand), 50s-60s science fiction movie, building plastic airplane models. I also love my urban deck garden, and cooking (I’m an improviser, not a recipe-follower).

If you’d like to book Tom Test on your next political voiceover project, please visit his profile here and get in touch!