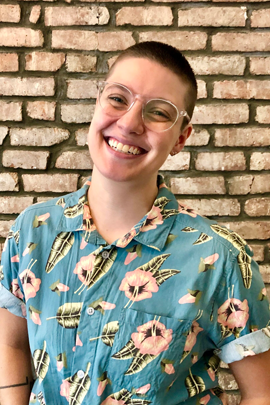 Allegra Verlezza (they/them) is a non-binary voiceover talent and actor. Allegra loves bringing their full authentic self to the mic and as a genderfluid person, Allegra feels affirmed voicing roles for non-binary folks and women. Allegra is queer and a proud member of the LGBTQIA+ community. With a background in non-profit advocacy, Allegra strives to use their voice to amplify progressive messages and advance liberation for marginalized communities everywhere.

Allegra's clients enjoy the ease and just plain fun of working with them! Allegra has voiced for the Smithsonian's National Museum of American History, the Trevor Project, and Audible as well as Toyota, AT&T, Disney+, Capital One, Xfinity, Dutch Boy Paint, iHeartMedia, and Pride Radio. One of Allegra's favorite voiceover moments was introducing Governor Kathy Hochul and Senator Chuck Schumer as the Voice of God and Live Announcer for Pride Live's groundbreaking ceremony for the Stonewall National Monument Visitors Center and concert headlined by Kesha!

As a full-time voiceover artist based in Brooklyn, NY, Allegra can offer same-day, possibly even immediate turnaround when needed. For urgent and rush jobs, Allegra is available after traditional business hours.

The Many Half-Lived Lives of Sam Sylvester (Audiobook)

Allegra Verlezza (they/them) is a full-time voiceover artist and actor based in Brooklyn, NY. Their sound sits on the Millennial / Gen Z cusp, making them a go-to voice for clients looking for a vocal vibe that’s chill, conversational, and youthful. Allegra’s versatile voice can also sound warm, sassy, playful, authoritative, knowledgable, wry, upbeat, relatable, and friendly. As a queer, non-binary person, Allegra is proud to be an LGBTQ+ voice actor.

Born in Brooklyn and raised in Shaker Heights, Ohio by a family of modern dancers, Allegra grew up surrounded by creative performance and art as activism. Allegra watched and assisted their parents in their work to make modern dance accessible to people of all abilities, bodies, and minds. This experience instilled in them a passion for using their creative talents and strengths to help others.

It also launched them into theatre and acting since the age of 12. Allegra continues to act in plays and has thoroughly enjoyed exploring the wonderfully weird world of acting in Zoom plays during the pandemic.

Allegra’s drive to advocate for others led them to earn a B.A. in Women & Gender Studies from Hunter College. Sitting in the very classrooms in which Audre Lorde taught motivated Allegra to try and live by her infamous every day: “When I dare to be powerful, to use my strength in the service of my vision, then it becomes less and less important whether I am afraid.”

Throughout and after college, Allegra volunteered and worked for a wide range of nonprofits that center the needs of low-income communities of color and LGBTQ+ folks including The Trevor Project, The Audre Lorde Project, The Center for LGBTQ Studies, The Bronx Defenders, and Green City Force.

Allegra is a Libra, Gryffindor, and their Myers-Briggs personality is the Protagonist (ENFJ) so they’ve got a whole lotta fire in them to fight for what’s right!


Allegra is fiercely passionate about fighting for liberation, justice, safety, and joy for all. Allegra believes a better future is possible if we center the voices and needs of those most marginalized, commit to grassroots organizing and providing mutual aid within our communities, actively learn and stay teachable, and dare to think transformatively. Allegra fights for the following and more:

An end to racism (systemic and individual), white supremacy, anti-Blackness, and all discrimination and violence against Black, Indigenous, and People of Color. A world where all BIPOC can live freely, fully, safely, and have equitable access to resources and opportunities.

An end to xenophobia, colonization, imperialism, and discrimination against immigrants, refugees, and anyone seeking asylum. An end to the cruel treatment of migrants and the separation of children from their parents at any border. A world where wealthy countries don’t create catastrophic issues elsewhere and don’t deny people safe refuge or access to a new place to live. No one is illegal.

An end to transphobia and discrimination against trans and gender non-conforming people as well as an end to misogyny against women and femmes. An intersectionally feminist world where folks of all gender identities and expressions can live full, equitable, safe lives with easy and affordable access to gender-affirming healthcare.

An end to queerphobia and homophobia against lesbian, gay, bisexual, queer, asexual, pansexual, and all people who live outside of heteronormative sexuality. A world where LGBTQIA+ people can thrive and the full, diverse spectrum of sexuality is celebrated and normalized in every area of society.

An end to ableism against disabled and neuro-divergent folks. An end to fatphobia and the policing of what bodies are deemed "good", "normal", or "healthy". A world where all bodies are affirmed, normalized and celebrated in media, and everyone's accessibility needs are met.

Free and quality healthcare and housing for all.

Reproductive freedom and autonomy that is trans-inclusive for all.

A higher, humane minimum wage and equitable pay for all. Reparations for Black communities, #LandBack to Indigenous communities, and a redistribution of wealth to low-income communities.

Climate justice and a robust addressing of all the ways humans and corporations have harmed the planet, prioritizing the low-income people of color being most impacted by these issues around the globe.

An intersectional approach to all the issues above as they are all interconnected.