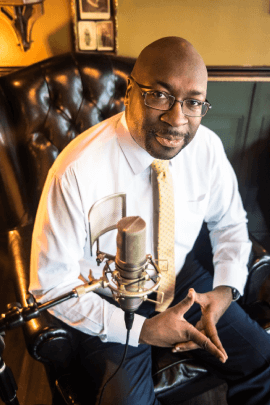 George is a full-time political voice actor with 17 years experience in the business of helping clients communicate their stories. After spending 20+ years in IT industry, George has been the voice of ROOT Sports Northwest, McDonalds, Spotify, and Mountain Dew ICE. George also spent 12 years as a baritone with Opera Carolina. His proudest voiceover moment was becoming one of the voices of the National Museum of African-American History and Culture.

George's voiceover work extends to radio and television commercials, e-learning, corporate narration, and telephony, providing solutions for clients all over the US and around the world.

Eastern Standard Time (EST, GMT-5). George can offer same-day turnaround, and is available for after hours and urgent work.

Say No To Trump

George is a full-time voice actor with 17 years experience in the business of helping clients communicate their stories. After spending 20+ years in IT industry, George has been the voice of ROOT Sports Northwest, McDonalds. Spotify, and Mountain Dew ICE. George also spent 12 years as a baritone with Opera Carolina. His proudest voiceover moment was becoming one of the voices of the National Museum of African-American History and Culture.

George is a voiceover talent from the Chicagoland area town of Kankakee, IL. He moved to Charlotte, NC in 1998, where he began singing with Opera Carolina in the chorus and comprimario roles. Soon after, he began on-camera work for then-First Union National Bank and commercial roles, all while maintaining his financial services information technology work. All of this led to the desire to make his living with his voice, and in 2003 he launched his voiceover career.

Since then, George has performed in nearly every area of voiceover, from commercial work with brands like CarMax, McDonalds, and Mountain Dew to narration for IMAX, the National Museum of African-American History and Culture, to phone messaging for hundreds of companies around the country, to video games like DC Universe Online and Starpoint Gemini: Warlords to multiple audiobooks available on Audible and e-learning for IBM, Merck, Commonwealth Edison, and Honda. His versatility is his greatest strength.

His singing included multiple roles with Opera Carolina, and a concert as a soloist with the Peoria (IL) Symphony Orchestra, singing the male solos from the classic Gershwin opera “Porgy and Bess.” Music has been a part of his life from childhood, and the use of his bass-baritone in the opera and classical music world has informed his voiceover performances, able to voice age ranges from 20-60…sometimes in the same day. George has also added live emcee events to his repertoire, taking advantage of his on-stage presence and powerful voice to help entertain and guide thousands in the conferences and events.

George and his wife Janan live in suburban Charlotte, NC.


In addition to providing voiceovers for Democrats and progressives and mission-driven organizations, George has been very passionate about a number of liberal and left-leaning causes, including health care, racial justice, and sensible gun regulation. George strongly believes that the richest nation on Earth should not be content with its citizens struggling for the basic human health services every other Western nation takes for granted. Unleashing the creativity and entrepreneurial spirit of the people of this country can be achieved with less fear that a broken leg or a cancer diagnosis can ruin a family financially. George has watched the change of the racial justice atmosphere of the country with great concern. This is not what we should aspire to be, with fear and xenophobia and a loss of basic respect for people with different racial backgrounds, national origins, and religious beliefs pushing us backwards as a nation. A nation that has three times as many weapons as people cannot be content with archaic gun laws and no research into the reasons for gun violence. George strongly believes that this is not the way the United States can continue, and very much believes that we can do much, much more to end the gun violence that is ravaging communities throughout the country.