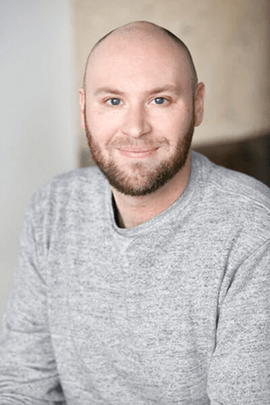 Ian’s broadcast-quality home studio includes a StudioBricks OnePlus sound booth, the AKG C414XLII & Sennheiser 416 microphones, the Focusrite Scarlett 2i2 interface and an ART Pro MPA II Pre-Amp. You can record with him live via SourceConnect, ipDTL + ISDN bridge, or a phone patch.

0-4 hour turnaround: As a full-time voice actor, Ian is available to record live at any time, with immediate & same-day turnaround... even for urgent/rush sessions and those after traditional business hours. His Minneapolis studio is in CST.

Ian Fishman is a full-time, award-winning freelance voice over talent & comedy writer based out of Minneapolis, Minnesota.

Originally from Worcester, Mass., Ian’s story is classic America: on one side, his Jewish great-grandmother emigrated to Brooklyn from Poland in the 20th century; on the other, he traces his lineage back to the Mayflower III. Mix ‘em with a strong dose of unabashedly punk rock drive & enthusiasm, and that’s how you get an “Ian Michael Fishman.”

Inspiring social change [and making people laugh] is what brought Ian on this path in the first place — naturally, his first three paid gigs were for being an extra on Law & Order, touring Appalachian elementary schools in a 2-person educational sketch comedy show about green energy with the National Theatre for Children, and a spoof PSA about Cooties that went viral and was shown on Comedy Central. He’s only looked back when he’s had to write his bio.

Since then, he’s made his name as the voice of your cheerful, confident, progressively happy-go-lucky Millennial next-door-neighbor [how’s that for an accurate run-on descriptor?].

Much like himself, Ian’s voice is classic-yet-current young, Millennial America: naturally mid-range, optimistic, confident and warm, but unafraid to stand up for what he believes in with an authentic, firm and direct sense of purpose. His “attack ad” style comes from a perspective of common sense over mudslinging; his natural empathy shines through when it’s time to “set the record straight” on a candidate or initiative. And thanks to his natural range, he can authentically connect just as easily with elderly voters worried about their grandchildren’s future as he can with first-time voters jumping off the fence.

As a result, Ian’s is the voice that can naturally connect with the widest range of voters.

You’ve heard Ian in one form or another around the world: his work spans the commercial world [TV/radio broadcast & promo, along with Internet pre-roll, streaming radio, and social media campaigns], narration [TV, documentary, medical and corporate], Explainer videos, eLearning, and IVR/On-Hold messaging. Corporate clients include Home Depot, IBM, Visa, 3M, and Medtronic [to name but a few], while non-profit and pet projects include the Boys & Girls Club, Forgotten Harvest, the Spay/Neuter Network, Efficiency Vermont, and the Minneapolis classic, the Heart of the Beast Theatre’s annual May Day Parade.

Outside of his work as one of the co-founders of Blue Wave, he’s also the voice & producer behind High End Voice Over, producing audio & Explainer videos for the legal cannabis industry throughout the U.S. and Canada — as well as one-half of Millennial Voiceover, a project he started alongside Blue Wave Voiceover with our own Maria Pendolino. He’s also the copy editor for the punk rock satire The Hard Times, a joke writer for the gag-gift company Prank-O, a guest director for the National Theatre for Children, and he directed the hit late-night show Late Nights Minneapolis.

He and his wife Abigail, who works in Youth Development Leadership with the national non-profit Playworks, live with their two cats, Gigglepuss and Sassmouth. If you’re ever in the Twin Cities, look them up and come share a homebrewed kölsch or a cup of tea in their lovely garden.


In addition to providing voiceovers for Democrats and progressives and mission-driven organizations - frankly, there’s a lot Ian is passionate about using his talents to help. What started as a 4,000 word essay has been boiled down to these essential points, by no means exhaustive or in order.