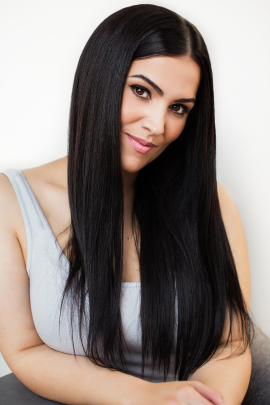 Issa Lopez is a full-time professional Latina political voice talent. She describes herself and her voice as Relatable, Direct, Passionate, Sassy and an Announcer.

Issa is a seasoned bilingual English and Spanish voice over pro, working across genres including commercial, radio imaging, explainer, promo, telephony, IVR, eLearning, and much more. To bring your vision to life, Issa is believable, real and you can ALWAYS hear her smile.

Issa treats your business as her own. Reliability and consistency are super important to her and she considers repeat customers the biggest compliment.

Mountain Standard Time (MST, GMT-7). Issa is a full-time voice talent that can offer immediate same-day turnaround and can be available after traditional business hours for urgent and rush jobs.

Getting her start at age sixteen as a demo singer for the likes of J-Lo, Jessica Simpson and Mandy Moore, it was clear that Issa was born to use her voice. These days, she employs her vocal prowess and unique Latino flavor in the voiceover and radio imaging worlds.

Issa’s sassy, hip and edgy style can be heard in practically every market across the United States, the Caribbean and South America. She is one of the most in demand Bilingual Voices in the freelance world and has been recognized among the TOP BILINGUAL voice over artists today. She can provide a Latin American voice or just a straight up English read for your projects.

Issa has a specific flare for voiceovers that need a “real girl feel” and can cover a full range of deliveries from virtual assistant to energetic, sassy, upbeat, tough, passionate, or conversational types of reads.

Leveraging her love for singing and experience in demoing songs for top artists, Issa went out on a limb and created a custom jingle for the biggest radio show in Colorado in 2002. Although the show was not looking for a new jingle, her’s won them over right away and they started using it the very next morning!

In 2005, her morning radio show,”Waking up with Issa”, launched on Clear Channel. By 2010, Issa was a bona fide syndicated voice for both English and Spanish markets at iHeartRadio.

After leaving radio gig in 2016, she decided to take a gamble and go full time VO. It was the best decision ever and she is loving every minute of it. Issa now has over 20 radio stations under her belt and counting!

Issa can be heard all across the board for companies like Target, Corona, Verizon, McDonalds, Kia, Hyundai, Pandora, SiriusXM, and Medicare. She says she really can’t pin down what she voices the most on weekly basis saying, “It just depends on what’s going on in the world”, remembering the urgent need for a Puerto Rican voiceover style after Hurricanes Maria and Harvey in 2017. At that time so many things where needed in Puerto Rico and for the victims in Houston. Issa was very glad that she was available to provide her part with her voice.

Issa is very proud that she is from Puerto Rico and has voiced several campaigns including the recent “Discover Puerto Rico” advertisement, political campaigns advocating for the Latino community across the United States, and the Democratic Party for TV, radio, Pandora, and online Social media campaigns. She really enjoys being a part of a future social awareness that she believes is absolutely necessary in today’s climate.

Issa also loves sharing her voiceover journey online and on social media and hopes to inspire others to take a chance on themselves.


In addition to providing voiceovers for Democrats and progressives and mission-driven organizations, Issa is passionate about empowering other women, she has helped speak at local charity events like the Colorado “Women’s Alliance Foundation” which raises money each year to support programs that improve the lives of women and children by helping fund a small business. Issa believes it only takes one person to believe in you to change your life….one of her favorite quotes is “ Educate one woman and it will change an entire village”. Issa stands by the power of mentoring others, keeping a humble spirit, and believes that giving back boosts your happiness, health, and sense of well being.