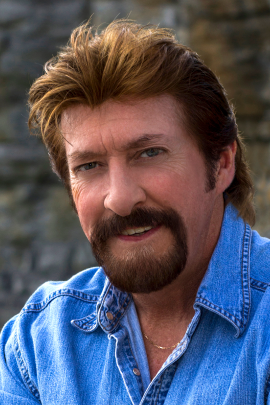 Rick has been a voiceover talent for over 25 years. If you're looking for a voiceover that sounds like Sam Eillott: you've come to the right place. With a background in music (Country hit singer/songwriter), commercial photography (studio in biz for 20 yrs), acting (theatre & on-cam) and is a US Navy veteran. Known as The Voice of Americana with his carefully crafted, warm heartland brand. His clients include John Deere, Harley Davidson, NASCAR, Cabela's, Bayer-Monsanto, US Army, Smith & Wesson Firearms, Championship Bull Riding, Houston Rodeo and many more. He's an accomplished Western Horseman/Rider. A passion for horses, Rick lives and works (studio) on his small horse ranch near Nashville, TN. Although not born in the South, he easily slips into a general, natural Southern accent when needed. As a political voiceover actor, he was the voice for Tulsi Gabbard's first two Senate campaigns and the start of her Presidential campaign. Rick has also worked on spots for Theresa Greenfield (Iowa Senate Race), Amy McGrath in the Kentucky senate race vs. Mitch McConnell, Senator Tammy Duckworth, Senator Jeff Merkley, Senator Gary Forby, Kentucky Governor Andy Beshear, Florida State Rep Anna Eskamani campaigns and more. Rick regularly voices for The Democratic Party.

Rick is known as The Voice of the Heartland. Working on a constant flow of various web videos, explainer videos, sales & trade show presentations, industrial product/service presentations, TV show narration and a healthy mix of TV and radio advertising throughout the US and abroad. Specializing in the areas of Agriculture, Energy Production, Construction & Manufacturing, Trucking, Outdoor Sports, Health Care, Hometown Banking, Travel and Entertainment. For clients such as Bayer-Monsanto, Jiffy Lube, Ford, Chevy, Sony Entertainment and more.

Rick has a beautiful, pro equipped studio located in a soundproof dedicated building on his horse ranch near Nashville, TN. His main mic is a Neumann TLM-103 with an audio chain of Symetrix 528e, Mackie boards, Focusrite Scarletts 2i2, 2i4, Mac computers and software.

Rick At The Mic

Rick has been a voiceover talent for over 25 years. His background and successes in music, commercial photography, acting (theatre & on-camera) and as a US Navy veteran have all contributed to his earthy, mature sound. Known as The Voice of Americana because of his deep, warm, rich all-American tone, his love of the outdoors and basically living out his VO life in real time, he created his own brand of voiceover. Serving the basic industries that keep America moving. Such as Agriculture, Construction & Manufacturing, Energy Production, Trucking, Tourism and Entertainment, Health Care, Hometown Banking and Finance, Outdoor Sports (hunters & shooters) and more.

Performing his very first voiceover for a Beef & Prime Rib specialty restaurant, he was really just at the right place at the right time. While singing a country music demo in a Nashville studio. But still he was not taking the idea of a voiceover / voice acting career too seriously at first. Rick was all wrapped up in trying to become a country music singing star! He had two #1 records in the secondary radio market from his first full length CD, Dark Horses, released in 1999. He also won first place in the Country/Bluegrass category of the First Annual Independent Music Awards of 2001. (See Wikipedia)

His Rick Lance Studio name became an umbrella for his music, his acting and voiceover work, and his 18 year-long commercial photography business in Nashville. Eventually burning out from the pressures of a serious music career , he learned to use his voice in an even more impressive, satisfying way as a Voice Talent. Rick has no regrets, though. He says that all that experience behind him comes together behind the microphone to produce a worldly, rich and gritty “been there, done that” confident kind of sound.

One of Rick’s greatest passions outside of his voiceover talent work is horses. Giving him creative inspiration and allowing him to literally live out his voice acting life on his 6 acre horse ranch (and studio) near Nashville, Tennessee. He says he’s a horseman, an outdoorsman and a weekend cowboy.