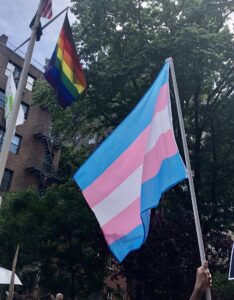 The Blue Wave Voiceover collective is thrilled to raise our voices in celebration of and solidarity with LGBTQIA+ pride voice actors and people across the globe! This June – and all year-round! – we are joyfully celebrating and amplifying queer and trans communities and we are also continuing to fight every day for the liberation of all LGBTQIA+ people. We’ve seen real movement in 2021 towards more inclusive representation in VO and less cisheteronormative casting. But we recognize that there is still much work to be done to break down the queerphobic and transphobic barriers in voiceover and the performing arts. And we would be remiss not to acknowledge that 2021 has been one of the most dangerous years in terms of anti-trans legislation, attacks against the rights of trans youth, and fatal violence against trans and gender non-conforming people, particularly BIPOC trans women and femmes. 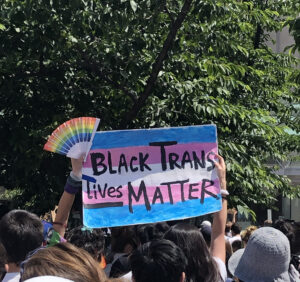 As a collective of voiceover artists who look and sound like America today, we Blue Wavers are extremely passionate about creating safer, more inclusive spaces for voice actors and people who identify anywhere along the beautifully diverse spectrums of gender, sexuality, and expression. We know this solidarity looks like advocating for LGBTQIA+ liberation in the present and also, remembering and uplifting the queer and trans activists of the past who paved the way.

This June not only marks another year of celebrating LGBTQIA+ people around the world and pressing for queer liberation, but it is also the 52nd anniversary of the Stonewall Riots. 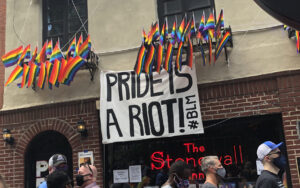 On June 28, 1969, police raided the Stonewall Inn – a queer bar that still proudly stands today in the West Village – and the queer and trans patrons fought back, igniting protests that lasted for days and launching the Gay Liberation Movement. On the frontlines were primarily trans women of color, drag queens, and butch lesbians including Marsha P. Johnson, Sylvia Rivera, Miss Major, and Stormé DeLarverie. Half a century later, we owe these courageous advocates everything for the progress we have seen and the victories we have won. Of course, there is still a long ways to go so as we continue to fight for justice for people of all sexualities, gender identities, and expressions, we remember Marsha P. Johnson’s words, “No pride for some of us without liberation for all of us!”

In celebration of LGBTQIA+ Pride 2021, we pass the mic to our amazingly talented artists!

And if you want to check out our LGBTQIA+ voice talents, search artist bios here. 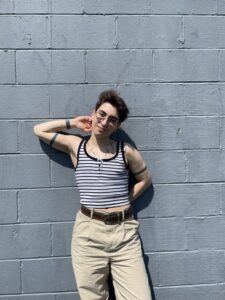 Zia Amador (he/him)
“Being a trans and non binary voice actor is such a pleasure. Knowing that my voice can help be the representation that I so desperately needed as a queer teen means the world to me. Recently I had the honor of voicing a non binary character for an animation talking about coming out and the importance of being an ally. As part of this project I was asked to share my own coming out story! Something I love about being a trans voice actor is that the roles I get tend to be much more personal. It’s awesome to see us being represented more!”

Cherie B. Tay (she/they)
“I am so proud to be out and queer. To me, the word “queer” represents joy, fearlessness, and the pride in being comfortable with who you are.
This past year, I got to voice an animated short as a non-binary platypus! It was so well done, and I was honored to tell their story. I also voiced eLearning projects about LGBTQ+ inclusion in classrooms!
I wanted people to learn that who they love is not a thing to be shameful about. May we all find acceptance, kindness, and love!” 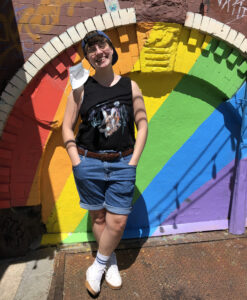 “Being queer, genderfluid, and non-binary fills me up with so much joy and pride! As a gender studies student, I learned – in the very classrooms in which Audre Lorde taught decades before – that to “queer” something as verb means to trouble and deconstruct something, to destabilize and dismantle the power dynamics of something. And boy do I love queering voiceover and acting!
Recently, I voiced a project for a virtual Pride event where a bunch of LGBTQ+ voice actors voiced the same script of proposing to their partner and the video included all of our voices. I absolutely loved this symbolism that a “queer voice” doesn’t sound like just one voice – it’s a huge, diverse cacophony of voices!
I care very deeply about creating space in the voiceover industry – and everywhere – for LGBTQ+ talents, particularly those most marginalized in our community like BIPOC and TGNC actors, to be their fullest and freest selves. I believe queer and trans voice actors amplifying our authentic voices is a revolutionary act and I know there’s a future where we never have to compromise any part of ourselves to do what we love. Inside and outside of the booth, I fight to break down reductive binaries and harmful stereotypes because living beyond the made-up binary benefits us all!”