Legal attempts at voter suppression are nothing new, and thousands of voters have been purged from the voter rolls in two key 2020 election states; Georgia and Wisconsin. Judge Paul Malloy in Wisconsin ordered the removal of 234,000 names from the state’s voter rolls claiming an attempt to remove inactive voters, or ones that have not responded to address confirmations from election officials. To put it into perspective, that is roughly 7 percent of the electorate in the state. Donald Trump won Wisconsin in the 2016 presidential election by just 23,000 votes. According to the Wisconsin Election Commission, the removal of these voters was not planned to happen until 2021, but in response to a lawsuit from a conservative group, Judge Paul Malloy had ordered that the voters be removed 30 days after they fail to respond to election officials. In battleground states, Democrats and progressives cannot afford to lose votes through forced partisan bureaucracy.

Four days after the judge’s ruling, Georgia Secretary of State Brad Raffensperger ordered the removal of 309,000 names from the state’s voter rolls. That makes up about 4 percent of the electorate. In the state’s gubernatorial race between Stacy Abrams and Brian Kemp in 2018, Stacy Abrams failed to qualify for the runoff by 21,000 votes. The purge will remove the names of at least 100,000 who have chosen not to vote in previous elections. This is happening shortly before the state’s primary election. And, unfortunately – there isn’t enough political advertising or political voiceovers in the world to cut through the noise if people simply aren’t permitted to cast their votes.

The fear from voter advocates is that this purge is meant to affect those who are younger, and poor or disenfranchised people of color who move often and who predominantly lean democratic. The “use it or lose it” mentality will revoke Georgian residents’ right to vote simply because some couldn’t or chose not to vote in past elections. This all stems back to an Ohio Supreme Court ruling in 2018, split 5-4 along partisan lines, that allows Ohio election officials to remove names from the voter rolls they deem outdated, and requires those voters to re-register.

What It Means for the 2020 Election Season 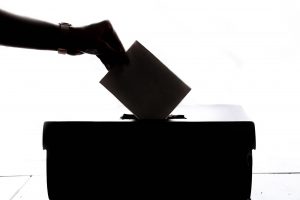 As we get closer to the 2020 presidential election it is expected that we see even more types of voter suppression beyond closed polling stations, long lines at the polls, broken polling booths, and new identification laws. The challenge here is that even if you are able to get your political spots in front of the voters you need, they may not be able to cast their vote. This is why Stacy Abrams has started her own advocacy group called Fair Fight, in an effort to put voter advocates on the ground in 20 swing states to help combat efforts to suppress an American’s right to vote. The group has created programs with the aim to educate voters about their rights, advocating for election reform and assisting in voter registration.

So far, Fair Fight has assisted in filing lawsuits against the Georgia voter purge and has proposed a fine of $300,000 for the state’s failure to turn over paper ballots for recounts.

With Fair Fight, Stacy Abrams is working hard to ensure that all voters have the chance to cast a vote and have their voices heard in the upcoming general election. She has started a campaign to raise enough money so Fair Fight representatives can assist voters in fighting suppression in all 20 battleground states. As of now the group has raised nearly 15 million dollars towards this goal. More information can be found on the group’s website, https://fairfight.com/.

Debbie Irwin is a Blue Wave voice talent and co-founder. To hear more of her work, visit DebbieIrwin.com.