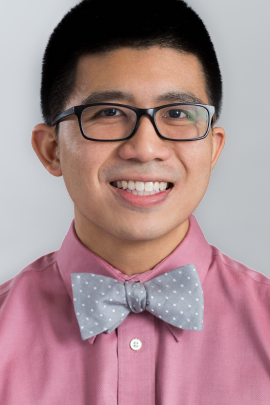 Mark is a male political voiceover talent based in New Jersey and New York City. Mark has represented major brands including Sony and Vanguard and is part of several audio dramas including Anthologies of Ullord. Mark is a proud Asian-American actor, with ethnic ties to the Philippines and China. Mark's fun fact is that he played club volleyball throughout high school and college despite usually being the shortest person on the team! Mark is pleased to offer fast political voiceover production and recording from his dedicated broadcast-quality home recording studio.

Mark has a wide range of voices and tones he can portray from warm and friendly to educational and authoritative. Mark specializes in commercial, animation, and video game work but can also be found voicing the occasional audiobook and e-learning presentation!

Mark has a professional, acoustically-treated home studio that is equipped with a Sennheiser 416 microphone and a Focusrite Scarlett 2i2 Interface.

Vote No on Trump - Negative/Attack Spot

Mark is a voiceover talent living in the New Jersey/New York City area. He is both Filipino and Chinese and can speak accented/conversational Tagalog and accented Chinese. Mark is well-versed in political voiceover recording and production and is honored to be one of the best Democratic voiceovers working today.

Mark has been a professional voice actor for several years and has been the voice for several brands including Sony, Vanguard, and the Pitta Drone. Mark has also been in several video games including The Christmas Spirit: Mother Goose’s Untold Tales and Quinn 5.

Mark has a mid-range to low-range voice and can voice anything from authoritative to friendly and upbeat, perfect as the guy-next-door, your friendly boss, a college professor, and the neighborhood dad!

Mark has trained under several teachers and schools for acting and voice acting. He studied Theater Arts at Brown University and went on to study acting at several schools in New York City, including The Acting Studio and The Barrow Group. He has also taken several improv classes at the People’s Improv Theater. His list of voiceover teachers includes Elizabeth Bunnell, Jay Snyder, Anne Hartung, and Ed Lewis.

When he’s not voice acting, Mark also enjoys playing volleyball and video games in his free time. Fun Fact: he stayed home during spring break in college to play a new video game.

Mark currently lives in NJ and is a short train ride away from NYC.


In addition to providing voiceovers for Democrats and progressives and mission-driven organizations, Mark is very passionate about several issues on the Democratic platform. Mark is very passionate about immigration reform. As the child of immigrant parents, Mark feels very strongly about easing the process for American Citizenship, with the detention camps at the border a testament to how broken the current system is. Mark also feels strongly about healthcare reform and would like to see a proposal for universal healthcare from the Democratic platform. Mark sees healthcare as a human right that should be accessible for everyone. Mark is an ally of other marginalized communities including the LGBTQ+ and racial minorities. As a part of a marginalized community himself, he is committed for equal rights and representation across all racial, gender, and sexual identities, not just that of the status quo. Mark also cares deeply for the environment. He wants to see legislation put forth that will make massive improvements to build a more sustainable, environment-friendly America. This includes but is not limited to reducing our carbon footprint and increasing our recycling programs to make full use of the Earth's precious resources.