It has been seven years since the school shooting at Sandy Hook Elementary School in Newtown, Connecticut where 20 children and 6 educators were killed, renewing calls for stricter gun control. Since December 14th, 2012, there have been 195 shootings on school grounds in America, averaging about one per week. The Sandy Hook shooting has been a turning point where moms demand action and everyday Americans have banned together to fight for a common cause.

There have been many people who have felt a call to action against gun violence in America. One of those people is Newtown resident Shannon Watts, the founder of Moms Demand Action for Gun Sense in America, who started a Facebook group the day after the tragedy, that posed the question, “How can everyone play a part to reduce gun violence in America?”

The group has since grown into a grassroots organization that is part of Everytown for Gun Safety, another organization that was also founded with the goal to end gun violence in communities all over the country. Everytown and Moms Demand Action now have chapters in every state and Washington, D.C., and nearly six million supporters. The group has pushed back on the gun lobby and has helped bring forth victories in state legislatures nationwide.

Both groups are founded on the notion that small changes in our communities are the first steps towards sweeping change nationwide. Most recent victories include the Richmond City Council, which passed an ordinance to report lost and stolen firearms, the Tacoma City Council which passed a tax on ammunition and firearms in order to promote public safety programs, and the St. Louis Board of Aldermen, which approved an ordinance that requires gun sellers to report failed background checks to law enforcement. Many volunteers from Everytown and Moms Demand Action have formally joined the political arena by winning seats in local offices all around the country. They’ve also been successful at creating content to share on social media sites – finding ways to reach citizens and voters where they are at beyond traditional political advertising. Everytown has produced short videos and spots with powerful voiceover layered over images of marches, rallies and family gatherings.

Gun violence statistics in the US have shown a rise in gun-related injuries. According to the CDC there were 39,773 gun deaths in 2017 alone, the highest on record. Each day 100 Americans die from gun violence. Each month 52 women are shot and killed by an intimate partner.

Movement Has Been Slow

In the past 20 years there has been a standstill in federal funding to research the effects and causes of gun violence. In 1996 congress passed the Omnibus Consolidated Appropriations Bill, known as The Dickey Amendment, in which “none of the funds made available for injury prevention and control at the Centers for Disease Control and Prevention may be used to advocate or promote gun control.”

Now the House has approved a bill that will allocate $25 million to the National Institutes of Health, and the Centers for Disease Control and Prevention to be used for gun violence research. The bill will need to be approved by the Senate and signed by the president, but these new funds could help us understand what causes gun violence and how we can prevent it. The push for these changes in the legislature would not have been possible had it not been for the grassroots organizing of everyday citizens.

If you’re advocating for common sense gun control, we’re here to help any way we can. Contact us anytime — we’re in the fight with you and will be proud to share our voice talents with your mission.

After the mass shooting at Marjory Stoneman Douglas High School that killed 17 students and teachers on February 14, 2018, survivors of the tragedy mourned, then gathered and organized a movement of activism. Us Kids, directed by Kim A. Snyder, follows the Parkland students as they move across the country rallying for common-sense gun laws and the end of school shootings. The film produced by Impact Partners will be a part of the Sundance Film Festival in 2020. Gun control remains a central issue in the overall Democratic platform and candidates, campaigns and organizations alike continue to look for ways to get the message out in their political spots.

Not Her First Rodeo

This isn’t Snyder’s first documentary film about school shootings. Her film, Newtown, about the shooting at Sandy Hook Elementary, premiered at the Sundance Film Festival in 2016 before being presented at festivals worldwide and on PBS’s Independent Lens and Netflix. It went on to win a Peabody Award. Her short, Lessons From a School Shooting: Notes From Dunblane, premiered at the Tribeca Film Festival in 2018. The short won the DocDispatch Award at the 2018 Sheffield DocFest, and a Grierson Award nomination. It is now available to stream on Netflix in 196 countries. 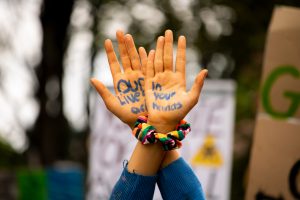 Gun control and gun safety would appear to be a cause close to Kim A. Snyder’s heart. In an interview with The Hollywood Reporter Snyder said of her upcoming film, Us Kids, “We’re very inspired right now with the youth movement. We’ve been doing a new project based in Parkland with some of the students here, so our body of work is really a trajectory of five years — probably more — of really trying to put a narrative on this sort of, hopefully, tipping point in our country that addresses gun violence.”

The Beginning of A Movement

After the shooting, survivors started March for Our Lives, a movement of activism that aims to “harness the power of young people across the country to fight for sensible gun violence prevention policies that save lives,” according to the website. Activists have led marches around the country to bring attention to the epidemic and to support legislation for tighter gun laws.

According to CNN, there have been 31 mass shootings at K-12 schools since the shooting at Marjory Stoneman Douglas in Parkland, Florida. There have been 142 mass shootings since Newtown. 100 Americans are killed every day as a result of gun violence. It is through activism and in survivors telling their stories that we can hope to bring about positive change.

A voice talent and co-founder of Blue Wave Voiceover, Debbie Irwin can also be found at DebbieIrwin.com.