We are thrilled to share that Blue Wave Voiceover was featured this week on ProductionHub’s blog! ProductionHub is a global network of local crew and vendors that serves the film and video production industry. You can find and hire anything you need, whether it’s voiceover artists like those here at Blue Wave Voiceover, a cameraman for one day, a video editor for one month or a full-time producer. Since launching in 1999, ProductionHub has grown beyond a simple directory into the most trusted resource for finding qualified and experienced crew, vendors and employees. ProductionHub is truly your film and video production partner.

Here’s an excerpt from the blog article, but you can read the whole thing on ProductionHub here! 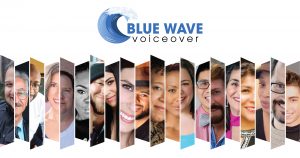 The 2020 election cycle has seen record ad spending as candidates vie for the attention of voters who have spent the last six months home consuming content on every device imaginable. But even before the COVID-19  pandemic began, the Democratic primary was the most expensive in history, with $1 billion in campaign media spend.

Is all that political ad money being well spent? Only if it reaches the ever-changing American electorate. If candidates want to appeal to a diverse group of voters, they need to use authentic voiceovers in their ads. That’s why we launched Blue Wave Voiceover in January, a collective of Democratic and progressive voiceover talents who look and sound like America in 2020. And, why we joined ProductionHub – to meet other professionals in the political media production chain.

We are diverse, full-time voiceover artists working from state-of-the-art home recording studios, with microphones from brands like Sennheiser and Neumann and sound isolation booths like the StudioBricks One and OnePlus, and Whisper Rooms. Every day we connect to studios and production facilities around the world using remote connectivity options like SourceConnect, ISDN, ipDTL, Zoom, Google Meet, Teams, or a good, ol’ fashioned analog phone patch.

Because the political advertising and news cycle moves so quickly, we made broadcast-quality home studios a requirement. We’re ready to turn spots around at a moment’s notice. It’s not uncommon to get a request at the end of the day on Friday so it can traffic over the weekend. It made us unbelievably well-positioned to continue working uninterrupted through the COVID-19 pandemic. We’ve always known that acting isn’t a 9-5 job.

Thanks again to ProductionHub for featuring us on their blog!

Spoiler Alert: Gen Z isn’t hanging out on Facebook with your Aunt Diane and her six cats.

Kids these days, amirite? Every day there’s another social media platform. Another app. Another place to find content. Create content. Put content. You name it – it’s happening in the digital ecosystem. But what’s interesting is that a clear generational divide is beginning to appear across the different social media and content platforms that exist. And perhaps the mighty titans, that seemingly built Silicon Valley into the buzzword it is today, are beginning to show some cracks in their foundations. Some signs of aging. Does Olay have a cream for that, too?

Advertisers are competing for eyeballs. (And earballs? If that’s a thing? Ok, maybe we’ll just stick with eyes and ears.) And they’re competing every second of every day. And in 2020, that goes doubly for political campaigns and advertisers that have a very short runway to work with in launching their message. Whether that’s with live action commercials with actors, national voiceover talents and a full production budget or quick and dirty animated videos with freelance VO artists under an ultra low budget. In order to gain market share, attention, visibility and more – answer this first question: where are those eyes and ears that everyone is so desperately trying to reach? The answer isn’t simple because we’re not all hanging out in the same place.

It used to be easy to reach people on a Thursday night with a powerful brand campaign, product launch, candidate ad or a water-cooler-conversation- funny spot. (Paging, Geico!) When you only had a handful of television stations to choose from and the internet was just homemade Geocities fan pages dedicated to Tickle Me Elmo and Michael Jordan. But now, a primetime television show on network TV might only pull in a few million viewers, while a viral cat video on YouTube could rack up more than 100 million views.

So – which generations are hanging out where? Gen Z and Millennials can be found on fledgling video network TikTok, Snapchat and Instagram, as their primary social media platforms. And they use and access multiple platforms per day. They’re also huge consumers of video content on YouTube and were at the forefront of the cord-cutting movement – leaving cable in the dust for platforms like Hulu, Pluto, YouTube TV, Sling and the new Disney+.

According to a social media study published on TheManifest.com, Facebook’s popularity is steeply declining with Gen Z, with only 36% surveyed using the platform regularly. A huge difference compared to surveyed Baby Boomers – 96% and Gen Xers – 90% who reported using Facebook regularly.

And when it comes to political advertising buys, you have the added difficulty of some platforms drawing lines in the sand. We’ve recently seen Google, Twitter and Spotify say that they don’t want to play in the political commercials game. Or at least, they’re getting very picky about it. Getting content in front of the right people on the right platforms is not only crucial, it’s also getting harder by the day.

So, before making your ad buy decisions – consider some key questions:

This can help ensure your ad dollars go further and you reach the buyers – and voters – that you most want to communicate with and influence.

Maria Pendolino is the powerhouse talent behind Voice By Maria and is the founder of MillennialVoiceover.com, a website dedicated to help brands and companies “Speak Millennial.” She’s a nationally repped voice talent that regularly works on television, radio and social media advertising campaigns. If you’re looking to hire a freelance female voiceover talent, you can check out her portfolio of work at www.voicebymaria.com. Maria is also proud to be the Voiceover Talent Coordinator for Blue Wave Voiceover. She can be reached via email at maria@bluewavevoiceover.com. You can also follow all of her cat photos on Instagram @mariapendo.

The digital media ecosystem is murky – at best – when it comes to advertising regulations, so the FTC has made a handy-dandy guide to help!

As social media channels grow in number, so too grows the number of influencers in the marketplace. By definition, an influencer is a person who has grown a following and has the ability or power to actually influence the decisions of those who read their posts. And, in some cases, hang on every word they say. Gen Z, Millennials and heck, even Baby Boomers follow influencers. According to a report published by Morning Consult, 72% of Gen Z and Millennials surveyed said they at least follow some influencers. It’s not surprising that brands, advertisers and even candidates are turning to these social media mavens to get their message across.

Celebrity vs. Influencer vs. Kid With Good Camera

Now, not every influencer is created equal. An influencer can be a legitimate and talented celebrity (and multi-hyphenate) – the Jonas Brothers (musical group), Ellen DeGeneres (television host, philanthropist, LGBTQ+ icon) and Reese Witherspoon (actor, producer, designer) come to mind under this category. An influencer can also be a personality – the entire Kardashian and Jenner clan come to mind here. Under momager Kris Jenner’s watchful eye and incredible business acumen, it seems like they are famous just for being famous. There are YouTube celebrities, like JoJo Siwa, who have amassed millions of adoring fans outside of the realm of the traditional Hollywood and media machines. And finally we reach: the rest of them. People who are actively trying to amass followers on Instagram or YouTube by taking pictures of their food until it gets cold, begging hotels to give them free nights in exchange for “exposure or coverage” and sometimes the people we read about who fall off of cliffs in pursuit of the most amazing selfie.

But, the Federal Trade Commission (FTC) doesn’t care if you have one follower or one hundred million followers. Rules and regulations for traditional media (things like false advertising and claims) have been pretty clear and well-policed, with a formal mechanism for complaints and actions. To help influencers understand the rules they must adhere to, the FTC recently released a document called Disclosures 101 for Social Media Influencers.

“The FTC works to stop deceptive ads, and its Endorsement Guides go into detail about how advertisers and endorsers can stay on the right side of the law.”

Most homegrown content producers probably weren’t thinking about advertising regulations when they went out and asked for products to review or crafted creative giveaways to gain followers. But, as the monetizing revolution started, it was clear that posting pictures, notes and videos on social media was beyond just communicating with your inner circle. It was a way to gain a following and make money. The largest talent agencies now have divisions that are dedicated to influencers and brokering relationships between “the talent” and brands and products.

So, if you want to engage an influencer to promote your brand, product, cause, candidate or issue – what do you need to know?

On page 3 of the guide, the FTC says to “disclose when you have any financial, employment, personal or family relationship with a brand.” And the FTC makes the distinction that a financial relationship doesn’t have to be just money. Hello: free products have real value.

On page 4 of the guide, the FTC says “Make sure people will see and understand the disclosure.” They recommend placing it front and center so that it’s hard to miss. They also go into recommendations on how to accomplish disclosures in picture posts, video posts and live streams. The FTC also calls out using simple language – while Gen Z and Millennials are all about the abbrevs. LOL, JK, lmao, brb – just using the hashtag #spon isn’t good enough. Stay away from abbreviations or anything that could be construed as confusing or having a second meaning.

What Else To Know

The FTC calls out that you can’t “talk about your experience with a product you haven’t tried.” If you want to be the authentic spokesman for the Hair Club for Men, and tell people how well the product worked for you – you actually do need to be a club member. They also call out on page 6 of the guide that “you can’t make up claims about a product that would require proof the advertiser doesn’t have…” Claims like this have been particularly challenging in the herbal supplement space, the fitness and weight loss space and the skin care space. (The Kardashians have been flagged a few times.)

If you want any more information about staying above board with influencers, endorsements and ads on social media and beyond, checkout the FTC’s microsite here at: FTC.gov/influencers.

Maria Pendolino is the founder and voiceover coordinator for talent at BlueWaveVoiceover.com. In addition to her freelance political voiceover work for democrats and progressives, Maria founded MillennialVoiceover.com, a website that focuses on helping brands and companies “Speak Millennial.” Maria is repped by talent agencies internationally and her voice can be heard on TV, terrestrial & satellite radio and in pre-roll campaigns on social media platforms. Maria’s portfolio of work and demos can be found at:  www.voicebymaria.com. She is a two-time Voice Arts Award winner and was also named to Buffalo’s 40 Under 40 for 2019. She lives in Buffalo, New York with her husband Eric, The Map Nerd, and their three rescue cats Two Scoops, Nellie and Mozzie. You can email maria@bluewavevoiceover.com with comments/questions and follow her on Instagram, @mariapendo.